Halloween is upon us already! Our favourite spooky holiday fell on a dreaded Monday this year (2016, you suck) but hopefully that didn’t deter anyone from celebrating! A few people have come up to me and asked, “Wait—what do British and Irish people even do for Halloween?!” Not to worry kids, although Halloween in the UK and Ireland might be a bit different than celebrating it back at home on one of your UC campuses, but they definitely have lots of fun things to do here too. Here are a couple ideas we’ve got for all things spooky, spidery, and supernatural…

Dress Up and Dance:

London: Now that we’re a bit too old to go trick or treating, the next best thing is to get 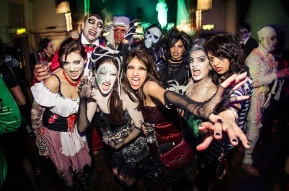 areas of London will be hosting parties chock full dressed up with all your friends and head to a Halloween party! Venues and clubs in all of revellers out for a good time, like Sky High Scream, where you can dance to live soul music til the wee hours of the morning, or the Stranger Things themed party over in Shoreditch.  Just make sure you go full out with your costumes – Halloween might not be as big of a deal as it is back home, but no one wants to see a boring get up!

Scotland & Ireland: Edinburgh is the perfect place to don a costume, as the architecture and cobblestone streets are a great backdrop to spookiness galore. Why Not? is featuring a Halloween dance night along with the aptly named Cabaret Voltaire. The most talked about event, however, has to be The Liquid Room’s ‘Rave of Thrones’, featuring actor Kristian Nairn’s DJ set. Nairn is best known for his role as Hodor on the popular TV show, so die-hard fans definitely go check it out! Glasgow’s famous Sub Club is naturally doing a Halloween event, and Dublin’s Wah Wah Club and Howl at the Moon are also hosting spook-tacular dance events! 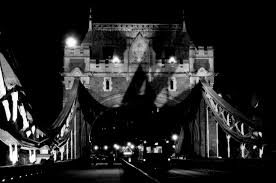 London: Luckily for us all, London is filled with tons of creepy history and spooky places to check out come All Hallow’s Eve. If you want to go somewhere haunted, then you’ve come to the right place! There are haunted pub crawls, haunted bus tours, haunted palace tours, you name it! If you’re looking for something a little more sophisticated, catch a performance of some extra-spooky stories at Fear in the Dark or check out the Museums at Night event, which is open throughout Halloween weekend as well. From the Tower of London to Jack the Ripper, check out this list of the most haunted places in London!

Scotland & Ireland: Just about every location on the Royal Mile claims to be haunted, so definitely check out a ghost tour. Mercat is both extremely historically informative and entertaining, and takes you underground the city! They also have tours specifically for Halloween, so check those out. If you’re feeling a bit more adventurous, check out these creepy abandoned places all throughout Scotland. This year also marks the first-ever Edinburgh Horror Festival, with free events running from morning till night! Similarly, Dublin’s ‘premier Halloween festival’, hosted by Otherworld, will feature live entertainment and a myriad of stands for browsing. And if you just can’t help yourself, here are some well-known ‘haunted’ places throughout Ireland. Get your ghoul on. 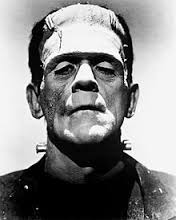 London: Tons of us look forward to Halloween just so we have an excuse to watch Hocus Pocus for the zillionth time, but there are also plenty of great opportunities to watch some scary films in London this Halloween. Grab some popcorn and catch a horror movie at the Rivoli Ballroom in Lewisham, or head over to the Chills in the Chapel event, which doubles as both a scary movie viewing and a fun fancy dress party! Be sure to check out independent cinemas around your area as well, to see what they’re showing for this ghoulish holiday.

Scotland & Ireland: There will be a free screening of ‘Young Frankenstein’ at the Grassmarket on Halloween, and the Banshee Labyrinth Cinema Room will be doing short horror films all day long. Retro Drive In has set up an outdoors drive-in cinema for Halloween, showcasing classics like ‘Scream’ and ‘Grease’!

London: Mexico’s ancient Dia de Los Muertos, or Day of the Dead Festival begins at midnight on 31st October, so after Halloween is over, there’s still fun to be had! Don’t confuse Dia de Los Muertos with Halloween – this holiday celebrates the spirits of the deceased, where families can communicate with their family members who’ve passed on. 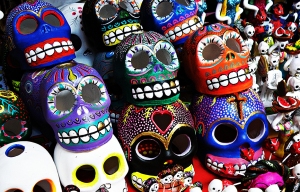 People make large altars called ofrendas and paint their faces or wear calavera (skull) masks to show their respect for the dead, as well as celebrating life. In London, the Wellcome Collection is throwing an all-day event on 5th November where participants can make their own ofrendas, and paint sugar skulls, and in Shoreditch, the Book Club is putting on an event called We Don’t Speak Mexican on 7th November, offering Mexican films and Spanish lessons in addition to ofrenda making and storytelling.

Scotland: The annual and extremely popular Samhuinn Fire Festival returns to Edinburgh’s Old Town on Halloween. Celebrating the transition from Summer to Winter, the festival includes a procession down the Royal Mile and a stage of performances on 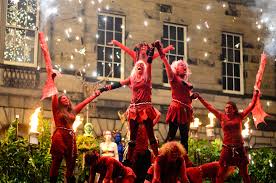 Parliament Square. The story follows the idea of Winter overthrowing Summer, with a stand-off between the Summer and Winter Kings. All of this is overseen by a Celtic representation of the Goddess, and the narrative will be portrayed through performances, music, and dance. It’s a spectacle not to be missed, especially as it’s free for all to attend!