It seems that every time I spot UC Merced student Susana Madrigal while scrolling through the UCEAP UKI Instagram feed, she’s off to see yet another show! I was quite impressed with how much Susana’s been out and about on the theatre scene since she arrived in London scarcely four months ago, so I asked her to write about her experience and all the shows she’s been to in her own words! Take it away Susana!

psychology major, a creative writing minor, and a 21-year-old.  I attended my first concert—5 Seconds of Summer—at the ripe age of 21.  When I arrived in London on New Year’s Day, I made myself a promise.  I promised myself that I would take full advantage of all the productions in London.  And that I have.  I have currently attended a total of eighteen productions—ten musicals, five plays, one Hindi music festival, one ballet, and one concert—Olly Murs.

My very first production—ever—was Harry Potter and the Cursed Child.  I managed to get tickets for the play four days after arriving to London, and on January 12 I lived it.  I knew I had to see Harry Potter and the Cursed Child at some point in my semester here because I am a die-hard fan.  It’s hard enough to get tickets to see it once, but twice within a month is a huge accomplishment, something that I hold.  Despite seeing it twice, I won’t reveal anything that happened in the production because I was sworn into secrecy by JK Rowling herself. 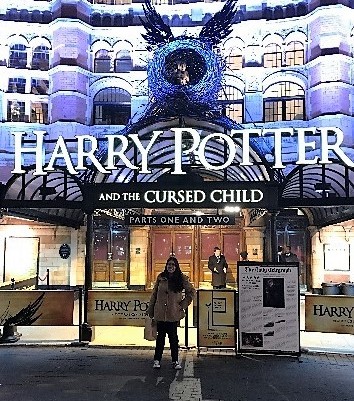 Out of all the musicals I have seen in the West End, I must say that the most notable were: The Lion King, Kinky Boots, Aladdin, Jersey Boys, and Les Misérables.  If you have not had the opportunity to experience The Lion King, then you need to.  The reviews for The Lion King do not lie, and it was by far the best musical performance.  Disney in general I have always adored, so it is no shocker that Aladdin made it onto the “notable” list.  Aladdin, in my opinion, was an extreme let down, however.  Not only was Abu removed from the musical entirely, but he was instead replaced with three friends, and Rajah (Jasmine’s tiger) was also replaced with three handmaidens.  As a Disney fan, this just ruined the entire musical for me.

London is the best city if you just want to sit down and enjoy some amazing productions.  All these productions have made my study abroad experience richer, and even though I have not travelled as much as I would have liked, I would not change all these productions for anything.  After all, if I could, then I would not have met David Tennant after his production Don Juan in Soho.  When in London, enjoy what the city has to offer in its productions and relish in the beauty and hard work of a good musical.