Each semester, students in London have the chance to sign up for our Mentorship Programme, where we match students with UC alumni working in London. It’s a really fruitful and special opportunity for different generations of current and previous students of the UC system to bond over being abroad or for students to get advice on the career industry they want to get into. We are so grateful to all of our amazing mentors who take the time out of their busy schedules to share their wisdom with us! Here are the student mentees of Spring 2017 on what they learned from their mentors: 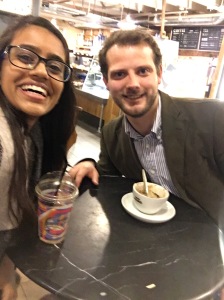 The UCEAP mentorship program was a great experience during which I had the opportunity to meet UC Santa Barbara alumnus Florian Schratt. During our first coffee meet up, we talked about everything from professional goals to personal life to the difficulties we faced when first moving to London. I really enjoyed learning about his career path and how he ended up working as a product manager and running a start up with an economics and geography degree. As a business major interested in technology, I’ve always been unsure how to enter the industry without much concrete experience as a recent graduate. One thing he made me realize was that the career path we set out for ourselves in college may turn out entirely different that we expect. He also offered a new perspective on graduate school and cleared up some misconceptions I had. During our second meet up, I visited his office at the Ministry of Justice and learned about his current projects and day to day life. This gave me a chance to see how he applies his skills to real world problems as a product manager. It was an absolute pleasure speaking to him about his professional and personal experiences, and I intend to keep in touch even after I move back to California.

I regretted not meeting with Jason sooner, as I let myself be swamped by schoolwork. He is a fantastic individual! He had a lot of guidance and insights into British culture that would have helped me acclimate faster. He and I share many common interests in policy and history, and much our lunch was spent talking about the quirks of British and American culture. I was able to ask him for guidance regarding my future career ambitions and regarding personal beliefs about how best

to spend my time while studying abroad. Jason is very passionate about public service and non-profits, and he encouraged me to pursue causes that I am passionate about even if I am entering consulting. After talking with him, my interest in living in London was renewed, as he reassured me of the values of living abroad. We will definitely be meeting again before I leave London, and I hope to keep in touch afterward.

Anthony Akerman and I have many commonalities; we were both “expat kids” with him living part of his childhood in Paris and I living part of mine in London. He studied Political Economy/International Studies at UC Berkeley where I now study Political Economy. He has worked closely with commercial aviation and it is the industry in which I hope to work. 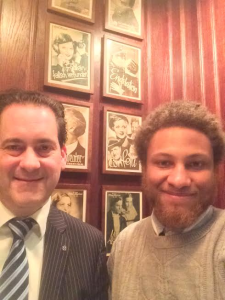 Now, Anthony works to facilitate the import and export of goods in the legal and logistical aspect of the movement of goods. His work has enabled him to travel a great deal. He lived and worked in Thailand for seven years importing Harley Davidsons and while the lifestyle was exciting, it was not conducive to having a wife and family. We spoke at great lengths about his work and I felt very encouraged that I someday could also do similar work while I am young and before starting a family. We spoke of the difficulties adjusting to the English schooling system for his children and what it is like living and working here. Anthony works, frequently, quite far away from central London in Crossways Business Park near Bluewater, at Heathrow and in Manchester. He travels a lot with his job and again we had many conflicting schedules. He did invite me to come out to Heathrow Airport to watch the big cargo planes unloading and now that I am back in London, I plan to meet him again and take him up on that offer.
Thank you for facilitating the meeting of two mentors as it has given me a different perspective on my future career and where my major at UC Berkeley and London School of Economics could take me.

I first met Jayme over dinner at Vinoteca Kings Cross and she immediately struck me as someone I knew I would grow to admire a lot. She’s both a working professional and a new mother. We clicked instantly and she made it clear she was there for me as a mentor and as someone I could go to for anything. She had a lot of valuable personal and professional advice to offer and organized a whole day at her company, Return Path, for me to meet members of her team via casual 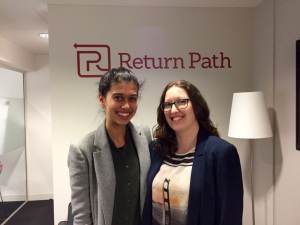 informational interviews and learn about their roles. As someone not entirely sure about what I want to do, this was a valuable opportunity to learn about non traditional roles that sit more at the interface of my interests. I’m very thankful to her for exposing to me to the inner workings of tech culture outside of Silicon Valley and for being a familiar face in an unfamiliar city. I can’t wait to see her the next time she’s in the Bay.