I’m Jackie Sun! I study computer science at UC Davis and I am studying abroad at the University of Edinburgh for the fall 2017 semester. I chose Scotland because of its natural beauty and history. I especially wanted to attend the University of Edinburgh because of its strong computer science department and the city itself.  I have a weekly music radio show on freshair.org.uk, which is Edinburgh’s student radio station. (*shameless plug alert*) My show is called Sundaze, and I play on Sundays at 2pm on freshair.org.uk.

I attended the Activities Fair during Freshers week and went to the FreshAir table. I knew I wanted to get involved with a university organisation and I thought, ‘how cool would it be to have a radio show?” I went along to the training session, recorded a demo, filled out an application, and was told a week later that I had gotten a slot! I was nervous and slightly stressed throughout the whole process since I’d never done anything with radio before, but it was all worth it! 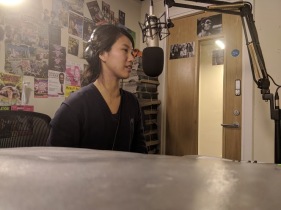 I love all the people I’ve met through FreshAir. We have weekly music team meetings where we suggest new releases, listen to them, and rate them. They’re super chill and fun and afterwards we go and grab a pint and hang out. The top 10 songs are then put on a playlist for our Music Hub show and published in the student newspaper, The Student. Last week, I suggested a song that was put on the playlist, which was quite cool. 🙂 I also occasionally make an appearance on the Music Hub show as well.

How do you balance your time while abroad doing classes and working?

Student radio can be as much of a commitment as you want. I have my one hour show, which is, strictly speaking, the only time I “have to” put in for the show. However, I often do additional shows (such as our Black History Month special) and go to our music team meetings. And, of course, if you want your show to be good, it’s probably best to spend some time on it, and I spend a fair amount of time thinking of each week’s theme, the songs I will play, the order in which I play them, and what I will say. However, I totally love all aspects of the radio and am listening to music constantly anyway!

Would you recommend that other students get involved with the station during their time abroad? Yes, definitely! Your show can be about anything, it doesn’t strictly have to be a music show. You get to meet so many people and it’s a fun way to be involved with the university in some way. You also get snazzy FreshAir shirts which you can show off to your friends. It is so much fun and one of the best decisions I’ve made here.