Hanna Meshell, a UCEAP Scotland student studying at the Edinburgh College of Art this fall 2018 semester, describes her experience studying at ECA, as well as displays her lovely collection of artwork that she has completed during her semester.  To read more about her experience and see her work, please continue reading below:

Unlike my previous courses, studio work at ECA is independently led. This has encouraged me to investigate my artistic perspective, and I have done so with excitement and purpose. My work has grown from pictures I have taken while walking through Edinburgh. I collected these moments of inspiration and combined them with research I gathered from a wide variety of sources. From this, I formed a coming of age narrative guided by symbols of natural growth. I then painted my imagery onto pieces of MDF about the size of my palm. These are satisfying in their scale and attention to detail. They activate people’s bodies, drawing them closer to the work. I then made a collage using photographs of tree parts I found around Scotland. I arranged these in a grid on a long white wall. Within this work I played with the idea of controlled chance because although I worked within a structure, I found and placed my images spontaneously. The collection conveyed messages of the life cycle, community, and human environmental impact. I also learned lithography and made a print of lichen I found in Isle of Skye. My zoomed-in image reminded me of a map and this brought to mind ideas of micro and macro which I have been playing with since

I have found great inspiration in Edinburgh’s Art community. Lucy Scaer’s exhibit in the Talbot Rice Gallery was an early influence. She linked a sculpture of the human nervous system with prints of algae to draw a connection between our bodies and plant’s circulatory systems. During my visit, I learned that trees form communities through root structures and this became a central idea in my work. In the Scottish National Gallery, I found guidance in Rembrandt’s small etches. I tried to bring his attention to detail into my paintings. Charlie Stiven said that when painting this size, there are no shortcuts and I took this to heart. I also resonated with George Shaw’s paintings which document his childhood landscape and suggest human presence through the “legacies” people leave behind. Andrew Cranston’s exhibit at the Ingleby Gallery was also instructive. Cranston uses small paintings of moments and memories to elevate the benign and activate a space. During his talk at ECA I agreed with his opinion that constraints are helpful to an artist

My study abroad experience has been an important stepping stone into my artistic career after college. I plan to continue the methods of collecting, editing, and painting that I formed here. I have spoken to many artists in Edinburgh and have understood the importance of being self motivated and diligent while creating work. I will remember this as I continue my practice. I am grateful for the guidance and inspiration I have found at ECA. Feeling accomplished in something out of my comfort zone has fostered in me an enlivened sense of self and sense of confidence

Read below Hanna’s Digital Journal, which describes her methods as she created her work throughout the semester at the Edinburgh College of Art

Starting in my senses, my work has grown from walking.

I walked at first as a tourist. I found Arthurs Seat, Edinburgh Castle, Calton Hill, the Royal Mile, and George Square. The city romanced me and I fell in love. Edinburgh promised me possibility and kindness.

With the new semester, I began to walk as a researcher. This time, not knowing what I was looking for, I took pictures to document moments of inspiration. These looked like windblown leaves, light pierced branches, amorphous cranes.

As I ventured out of the city center and into its surrounding nature, I found more inspiration in the environment. Most striking to me were Dalkeith Country Park, Blackford Hill, the Isle of Skye, and Costorphine Hill. Water and its role as a barrier as well as a means of transportation began to dominate my thoughts. Following my Odyssey, I searched for a hidden world that would describe the incandescent feeling of being in this environment.

I then sat in my studio cutting out the subjects of my inspiration from printedimages. I began allowing passing thoughts and moments to hold a place in my life. I still didn’t know their meaning, but I understood the feeling of collecting. Like collecting sea shells at the beach, I acted spontaneously and nurtured my objects as they took on an importance beyond themselves.

I pasted these moments onto the wall in from of me. As I grouped images into themes, they started to tell a story about grasping at the crystalline feeling that sews them together.

I then painted my moments on the same scale as their printed images. This created very small works that reminded me of dollhouse decorations. Miniature controllable versions of the world. I painted in a way that strained my neck and shoulders. I spent hours looking, finding, and recreating. I recognized this feeling as a safe place within myself, one that I understood and was accustomed to.

I then took my field work to institutions of knowledge. In the National Museum I was again greeted by feelings of childhood. I stared in amazement at crystals and minerals that were created through processes far from my understanding of time and growth. This underground system was later echoed in an art show by Lucy Scaer. Scaer surrounded a educational model used to explain our nervous system with copper-plate prints of algae. In doing so she highlighted the connection between our intricate inner-workings and plants’ circulatory systems. My guide further linked this with the underground root systems trees use to communicate and redirect water and nutrients to those in need.

This idea formed a solid place in my mind. It provided me with something real yet widely unseen. It was an explainable type of wonder accompanied by imagery.

Again collecting but now with a goal in mind, I started a collage. The collage took the form of hundreds of chopped tree trunks. I found these while, again, walking through Edinburgh and the wider Scottish landscape. I enjoyed the controlled chance that was at play here. Although I chose my imagery based on a theme, I found each individual trunk spontaneously. My photographs depended upon where I wandered and what caught my eye. I then printed these images and cut them using house scissors. This blunt method of shaping was again guided by instinct as I quickly decided which parts of the trees to keep or do away with.

When it came time to display my images I remained connected to the theme that dominated the work’s creation. I decided to paste them to a large white wall in a grid formation. This provided an ordered system that connected my work to the history of the grid, a structure that is recognizable and open enough for people to add their individual interpretations. I then let chance decide where each image was placed within the grid.

Together these hundreds of cut trees told a story of growth amidst destruction. It was reminiscent of the the life cycle, of graves and of rebirth. It also played with themes of community and of the substance that binds us all together. Growing up without a strong sense of religion, I began to identify with this understanding of spirituality.

My final weeks here were spent reflecting. Far from a green landscape teeming with life, Edinburgh in winter is grey and rain-washed. Spending my time indoors I have thought about what the city has given me. I am lucky to have made friends with kind people who I admire for their sense of adventure and humor. I am going to miss dancing and exploring with them. I will also miss my tutors who have been generous with their patience and guidance. Finally, I am sorry to leave all of the hills I have walked and those which I have yet to explore. I will take these experiences with me as I enter into my life as an artist after college. I will be forever grateful for what Scotland has given me: an invigorated sense of self, clearer direction, and broadened worldview. 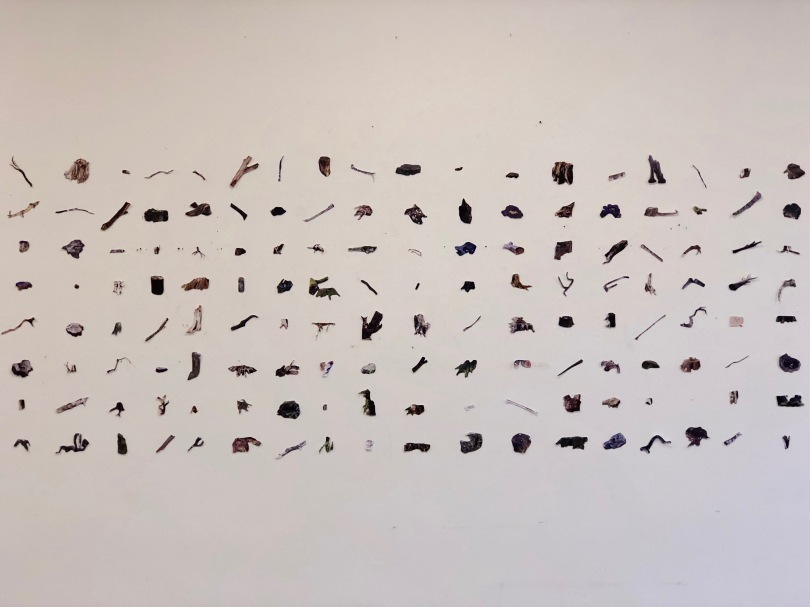